"The Last King of Scotland" by Kevin MacDonald

“Do you have monkeys in Scotland?”

Scotland, 1970. Some young people run and throw to the water. Then, one of these people is sat with his parents. This man is a doctor called Nicholas Garrigan, the main character of this film. He is tired of his boring life so he decides to travel anywhere. He takes a globe and says “first place you land, you go”. Finally he is lead to go to Uganda, where he will try to find a new life and “a bit of adventure, something different”.

This is a brief description of the prelude of “The Last King of Scotland”.
After that beginning, he starts an adventure in the African country where destiny will cross him with Idi Amin, the King of Scotland, although Sarah Merrit tried to avoid it. And that is precisely what this story tells, their peculiar relationship.

“But a man who shows fear, he is weak and he is a slave” The President of Uganda
“Well, if you’re afraid of dying, it shows you have a life worth keeping” Nicholas
It may not be a better way for describing characters than with their words. I have chosen the quotes of the film that I consider being correct to describe the most important roles of “The Last King of Scotland”. 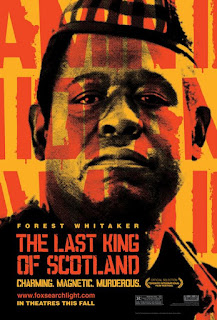 It is important to analyse the development of the relationship between both characters along the story undergoes a huge transformation. Nicholas is a pacific man with an European mind. He has travelled from the First to the Third World, where everything is different. However, Amin is opposed to Nicholas. Although at the beginning the audience can not realise, he is totalitarian, egocentric and violent. Amin coaxes Nicholas into helping him to govern. When the Scottish man wants to go back because he realises of the lies, it is too late.
The main topics of this long film are both the political diseases in Uganda, where the Government is totally corrupted and the violence against the Opposition. This film shows also the role of mass media for controlling the society. 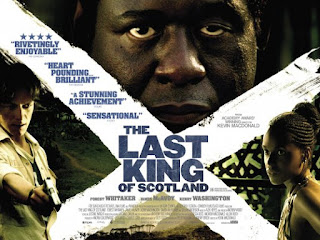 This film is inspired by real people and events.
Its story is based on the homonym book written by Giles Foden.
“The Last King of Scotland”, which was released in September 2006, was directed by Kevin

MacDonald. Its original languages are both English and Swahili, and so I strongly recommend you to watch it in original version. The film lasts for 118 minutes approximately. This is an English production, and that is the reason why the story is seen from their partial point of view. That is not bad, because objectivity is impossible, but the spectator must take this into account because when you watch the film you can interpret the superiority of the white man. Yes, I mean that this film can be in some way racist, but it depends again on the point of view. Another possibility could be to interpret the film like a denunciation against dictatorships and violence, which is what I understood.

Concerning the direction of photography, it was led by Anthony Dod Mantle. What I can detach is that the predominant colours are blue and brown. Blue is the colour of the Scottish flag, as you can see in the upper part. Brown is the mixture of the three colours of the flag of Uganda; red, yellow and black.
The title credits also make reference to the second flag, because they are red and yellow with a black background. 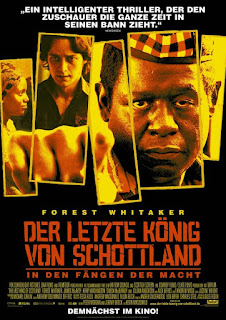 A great part of the music chosen for this film, compounded by twelve songs, has African rhythms.
I could not finish this text without mentioning the actors that make possible this film. Firstly I must name Forest Whitaker that plays the part of Idi Amin. He won not only an Academy Award in the category of Best Leading Actor but also twenty two more prizes.

Moreover, James McAvoy plays the role of the main character, Nicholas Garrigan; Kerry Washington acts as Kay Amin; Gillian Anderson as Sarah Merrit; Simon McBurney as Stone, etcetera
To finish, I want to recommend you specifically to watch this film and this way learning more things about Uganda and its history. Then, I hope that you give me your opinion.