"My name is Richard and I am your uncle" 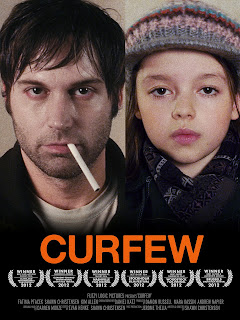 "Curfew" is an American production written and directed by Shawn Christensen, who is also the frontman of an indie rock band called "Sterrastarr". It lasts approximately 19 minutes.

This short film tells the story of Richie, a young man who is about to commit suicide, but a phone call stops him. It is his sister Maggie who wants to ask him for a favour: taking care of her daughter Sophia. He accepts although the relationship with his sister was receded.

When Richie meets Sophia, she starts stating some rules that he may follow, and the girl threatens him not to breach those rules. Richie will try to attract the attention of the young girl showing her an alternative world.

"Curfew" stars Kim Allen as Maggie, Fatima Ptacek as Sophia and the own director, Shawn Christensen as Richie.

"Curfew" is nominated at the 2013 Oscars in the category of Life Action Short Film, among "Asad", "Buzkashi Boys", "Death Of A Shadow" and "Henri". It is actually the first nomination for its director. However, this short film has already got many awards from festivals from all over the world.

Probably the most interesting fact is both Richie and Sophia's characters arc. Richie starts being a man without reasons to live but he will try to find one. On the other hand, Sophia makes a big change from the moment she meets her uncle. Moreover, their performance is quite remarkable.

"Death Of A Shadow" by Tom Van Avermaet: http://spictures31.blogspot.com.es/2013/02/death-of-shadow-by-tom-van-avermaet.html