"Midnight in Paris" by Woody Allen

“I’m having trouble because I’m a Hollywood hack who never gave actual literature a shot until now.” 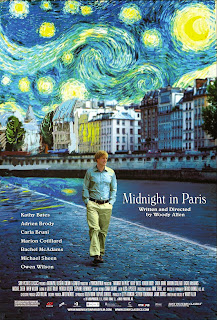 Paris streets. People walking. Cars moving. Moulin Rouge. Louvre Museum. The Eiffel Tower. It starts raining. The night comes to the City of Love.
"This is unbelievable. Look at this. There is no city like this in the world. There never was."


Midnight in Paris or Minuit à Paris (2011), written and directed by Woody Allen, starts like that. Both English and French are spoken at this film, and sometimes even Spanish.

It tells the story of Gil Pender, who travels to Paris for trying to finish his novel and try its success because he wants to change his former life. His fiancée Inez accompanies him in that adventure that they are supposed to live together because they are about to marry.


Watching #MidnightinParis again. really #entertainingmovie and makes me want to go to #Paris and read up on #1920swriters
— Ornella DiCarlo (@Ornella717) diciembre 27, 2013

One day he doesn't feel like going out to a party so Inez decides to go alone. Then, he tries to find the way to the hotel but suddenly he gets involved in an unexpected plan that will change his life.

The main subject of this film is actually love. It makes also a reflection on art and artist’s personalities because actually literature is very present in Midnight in Paris. Pablo Picasso, Man Ray, Luis Buñuel, Edgar Degas and some others are real characters in the film.
"Is that what you're dreaming about? Your literary idols?"

"You liked my book? Yes, it was a good book because it was an honest book." Hemingway in #MidnightInParis is a gosh darn badass.
— Reece Lyne (@ReeceLyne) diciembre 27, 2013


Concerning the staging, it could be said that Woody Allen's style is quite noticeable along the running time of the film. The rhythm is not really fast, so the camera movements are also slow. Especially in his latest films, he has created a characteristic way of filming which is connected to the cinematography.

Warm colours prevail here, as well as in the later film Blue Jasmine (2013). Yellow is actually the main colour. This could have been used to show that Paris streets are charming. Green and red are also common. This work was made by Darius Khondji.

"All cowardice comes from not loving or not loving well, which is the same thing." #hemingway #midnightinparis
— Kaitlyn Kappus (@kkappuss) diciembre 25, 2013

Not only the cinematography, but also the screenplay is part of Woody Allen's style. That is mainly for the conversations among the characters, which are really natural and quotidian.

In this case, among that naturalness, there is something surrealistic or at least out of the normality. Due to his obsession with literature, the main character gets into a parallel world where some of the best writers are still alive.
As usual, the importance of women is evident in this film, although the leading role is a man this time.

The cast of Midnight in Paris is also worthy of some words. Owen Wilson  plays the lead, and he does a great job. Rachel McAdams, on the other hand, plays the part of Gil's girlfriend. Marion Cotillard is part of the cast as well with a very interesting character called Adriana. Another girl that will be very close to Gill is Gabrielle, played by Léa Seydoux.
Carla Bruni, Kurt Fuller, Mimi Kennedy, Karine Vanasse, etc. also make their appearance.

Another outstanding aspect is the music, which was carried out by Stephane Wrembel. It is quite classical in its way, but it creates a certain atmosphere that completes the sense of the whole film.

There is a very interesting curiosity. Usually the day corresponds with the normal life. However, in the night all the dreams and abstract ideas appear and, like in real life, it is difficult to distinguish between reality and fantasy.

All in all, Midnight in Paris could be one of the best films by Woody Allen so far, although he has other interesting creations in his filmography. It is especially recommended for lovers of Cinema or just people who are in love. And of course people who enjoy literature are likely to enjoy the film.

"You're a writer. You need time to write." Midnight in Paris