'The Iron Lady' by Phyllida Lloyd 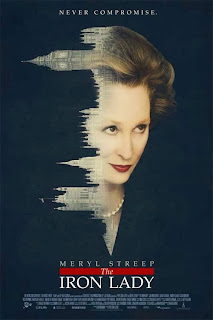 This well-known film was directed by Phyllida Lloyd in 2011 and was written by Abi Morgan. Furthermore, it was produced by Damian Jones. The shooting of this long film, that lasts for 105 minutes approximately, began on location in the UK on 31st January 2011

This biographical film tells the story of miss Margaret Hilda Thatcher; nicknamed 'The Iron Lady', who married Denis Thatcher. This lady was both in real life and in this film an important conservative politician who became the first woman holding the post of Prime Minister of the United Kingdom from 1979 to 1990. Thatcher wanted  to change and renovate the way in which politicians governed to their subjects since she started her career. "Someone must say the unsayable", and Margaret considers that she is the right person to do it.

Margaret Thatcher has clear ideas and principles and she will not forget or betray them. She is persevering and hard-working, and that is the reason why she fights from the beginning till the end to get what she wants. Indeed, in the film she says: "I have a single battle every single day of my life" and also "One must be brave if one is to take the wheel". This is what describes better her character. Consequently, her character arc in this film is null; she does not change at all.
To sum up, this is a story of overcoming. 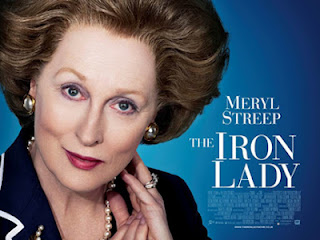 The tale starts when she is old, but during the running time there are numerous flashbacks in which this lady remembers important moments of her past; but not only she remembers it but also she believes she is still the Prime Minister and lives with her husband, but actually he is dead.
In her thoughts, her husband tells when Margaret is watching a film of her family years ago that she can rewind it but she can not change what happened. That might just be her problem after so many years, that maybe she should have made some things in a different way.
With great power comes great responsibility, and in the past she chose that political responsibility prevailed over family responsibility.

All this story takes place in the United Kingdom in a recession period; that is to say a period when the economy of a country is not successful and conditions for business are bad. In my opinion this is one of the main reasons why 'The Iron Lady' has been so successful, because currently a great part of the world is living an important crisis and then people must feel identified with what the film shows. Then, what this long film remembers us is that this is not the first recession of the history, and what is more controversial, it makes the audience to wonder which is the best way to end up with that situation.

Now it is time to dedicate some more lines to the cast of 'The Iron Lady'.
Firstly I must mention the main character, Margaret Thatcher. As you may know, this leading role is played by American actress Meryl Streep. Her career in this industry started in 1977, when she worked in the film 'Julia' and so far, when she is sixty three years old, she has received seventeen Academy Award nominations, from which she has won three and twenty six Golden Globe nominations, winning eight. Furthermore, she has won one Cannes Film Festival award, five New York Film Critics Circle awards, two awards at BAFTA, two more Emmy Awards, etcetera. 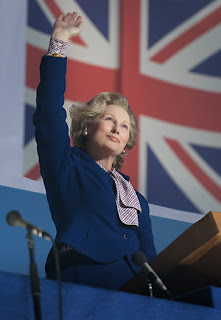 No doubt that this is the other main reason for the success of 'The Iron Lady'. Currently she is a wager without risk at cinema. Her role in this film, as well as in other works of her, is stunning. Her real role is to make the audience believe that she is actually Margaret Thatcher.

This film also shows a young Margaret Thatcher, and obviously this role is not played by the mentioned actress. It is played by Alexandra Roach, who is a Welsh actress with a much shorter career.

Moreover, the famous English actor Jim Broadbent plays the part of Denis Thatcher. His younger days in this film are represented by Harry Lloyd, also born and raised in England. 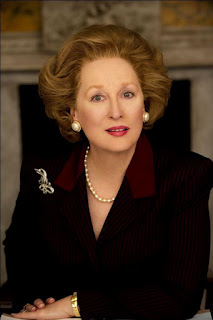 To conclude, I have decided to point out the direction of photography, which was carried out by Elliot Davis. During almost all the running time of the film, blue colour prevails, and I believe that is should be interpreted as the colour that represents the right handed in politics, the conservative political parties; which is a great job by Davis. There is only one moment when blue is replaced by red; when the main character stops being the Prime Minister.

"In the end, right will prevail over wrong" The Iron Lady