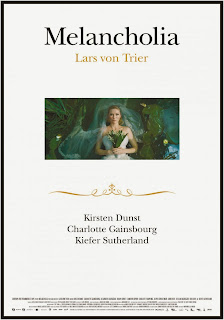 "Melancholia" is a 2011 long film written and directed by Lars von Trier, who was born fifty six years ago in Denmark. Of course, the language of the film is English, so you should watch it in original version because this way the sound is not modified; it is exactly the same as it was recorded.

The idea for this film appeared while the director was attending a therapy for his depression. Its budget invested was US$ 9.4 million (52.5 million kr) approximately, but it has been worth while because the result has been a great film and has collected US$ 16,668,747 in box office.

The extraordinary story has been divided in two parts; the first one is called 'Justine' and the second one 'Claire'. Both refer to two of the main characters. 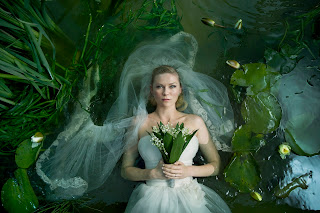 Before that there is an introduction or exposition of the film; I would call it prelude. In this part, the member of the audience can see several shots in slow motion showing Justine in harmony with nature (watch the picture below). At the same time, there are shots showing two planets drawing near. Trier includes in this part essential information to understand the rest of the film. In fact, in my opinion this is the best part of the film, the apotheosis. It inspires calmness and transmits a feeling of beauty although the audience may not understand some things yet.

The first part concerns Justine's wedding with Michael and the second one, which is supposed to happen after, continues with the relation of Justine with her sister Claire. Both characters end changing their roles in some way; they seem to exchange their behaviour.
All this is conditioned by an upcoming planetary catastrophe.
Many films are about weddings, but this is not a common film about a common wedding. The mixture between a wedding and a natural disaster is not frequent in films. 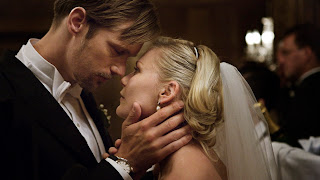 In the beginning I thought that this was a fantasy film, but after listening to the speech by the astrophysicist Michael J. D.  Linden-Vornle and Peter Hjorth (which is included in the extras of the DVD), I suddenly became convinced that actually it was science fiction.


The visual effects supervisor, Peter Hjorth, says: 'Everything that you see in Melancholia is real'; 'All that is based on real science'. Moreover, Michael J. D.  Linden-Vornle adds 'the probability that a planet should hit Earth is very very very small, but it is still possible'.

I have talked about the character of Justine before. This peculiar character is moved by melancholia; I mean, her mood is defined by the melancholia that causes the approximation of Melancholia planet.


Kirsten Dunst plays the role of what seems to be an odd girl. Her performance in "Melancholia" is outstanding, and that is the reason why she received the Best Actress Award at Cannes Film Festival. Her great work has been rewarded also at the US National Society of Film Critics and at the Australian Academy of Cinema and Television Arts Awards.


I have read that in the beginning it was the Spanish actress Penélope Cruz who was going to play the part of Justine, but then she cancelled because of other engagements. Actually I would like to know how would be this film with her performance, because I consider that she is also a good actress.


The staging is excellent, or at least it satisfies my expectations. The main colours in this film are yellow in the fist part and blue in the second one. Yellow means happiness and blue transmits calmness and melancholy. The meaning of the camera movements are a mystery for me. In one interview, Lars von Trier says that they use the handle camera to let the actors more freedom, to allow more spontaneity, and in that sense I think that it worked. However, when I was watching it I interpreted that there was someone in the story that was watching them, or maybe that was recording them with a camcorder. In other words, I thought that it was a subjective point of view. 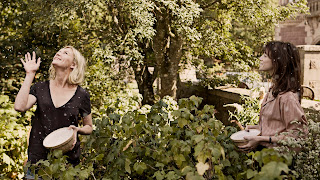 Undoubtedly I must say some words about the music used for this film before ending this review. The director has chosen a composition by Richard Wagner, which is the prelude to 'Tristan and Isolda'. He considers this music as romantic. I just can add that the music fits perfectly with the image. It transmits loads of feelings in relation with the complete film.


To be honest, I must admit that this is the first film directed by this gentleman that I watch, but after this experience I am willing to watch more films of his filmography. And not only will I watch some of his previous films but also I will watch the next one, that as has been announced recently, will be named "The nymphomaniac".


To put it in a nutshell, "It is meant to be a film about melancholia" (Lars von Trier)